Amphibians and Reptiles  of Europe

As soon as the first rumours arose about a new viper species from a small area in the the Italian Alps, new trip plans were forged. Bit by bit more details came out and thanks to Wouter's excellent detective work we figured out in which valley this new viper species occurs. The discovery itself is quite an exciting one, previously the vipers from this valley were thought to be common adders which they resemble superficially. Genetic testing however proved that these vipers are closely related to vipers from the Caucasus. More information about this newly described viper species can be found under the following link: http://novataxa.blogspot.nl/2016/07/vipera-walser.html

Almost the whole extended herping family gathered for a weekend of herping in northwestern Italy, and so we were with 14 people of 5 different nationalities for this little herping jaunt.

Straight after work I took the train to Schiphol where Gert Jan was already waiting and doing some "vulturing". Not long after I arrived also Matthijs joined us and we took the plane to Milano Malpensa. Pauli was already waiting for us and after collecting the rental car we drove to a spot I got from two Italian friends I made last year in NE Turkey. First we had a tasty pizza along the road and at the spot we quickly found many Pool Frogs (Pelophylax lessonae), two Grass Snakes (Natrix natrix) and a single Italian Tree Frog (Hyla intermedia) was calling. It didn't take long for an angry farmer to arrive on his tractor as well. He thought it would be a good idea to talk louder and louder, maybe we could understand Italian then. Also the Carabinieri joined the frey but without too much of a fuzz they let us leave again. Without having seen Pelobate Fosco though... After a short drive we arrived in the Italian Alps and quickly found the inn where we would all be spending the night. 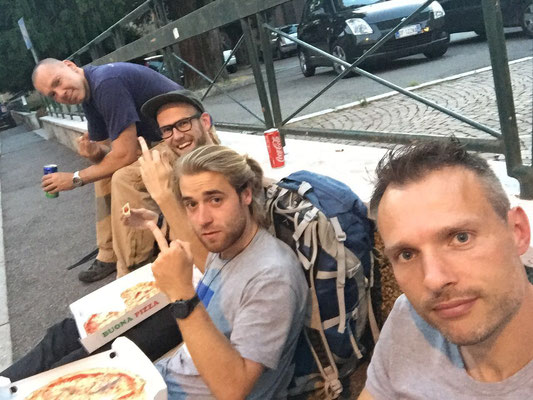 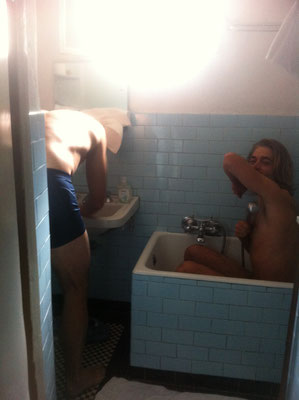 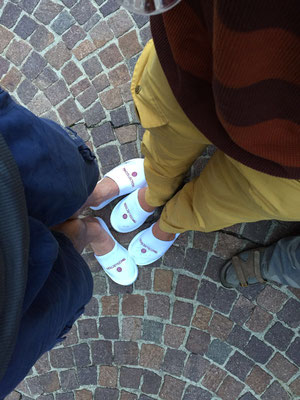 At breakfast we met all our other (mainly Belgian) amigos, pushed some food in our necks and drove up into the beautiful Italian mountain scenery. The lush green valley is littered with waterfalls and small streams. The steep cliffs are towering high above your head and herping here is pure bliss. Our targets were quickly found and without too much problems we found Wall Lizards (Podarcis muralis), Italian Slow Worms (Anguis veronensis), Viviparous Lizards (Zootoca vivipara carniolica), Smooth Snakes (Coronella austriaca), Asp Vipers (Vipera aspis atra) and also three Walser Vipers (Vipera walser). Very interesting to see these two viper species occuring syntopically, being found in seemingly exactly the same habitat but probably occupying slightly different niches. However we found both species in the same thickets and didn't observe any differences in habitat occupancy.

Sadly the cloud cover became thicker and thicker and not for long it started to rain. We took shelter in a restaurant in town and enjoyed pasta and beer, hoping the rain would stop. It didn't. We did ran into local police who heared from villagers that a large group of foreigners was spotted on the mountain slopes. Reportedly they were "smuggling" snakes. We were delighted local people care for the enviroment and this range restricted viper species. We told them we were only here to take pictures and nothing more. Among them was also Lorenzo Laddaga, one of the researchers decribing the new species which was a nice coincidence!

In the evening we enjoyed more pasta and beer, Matthijs and I washed some local cars from Gert Jan's balcony. We also wanted to wish Wouter and Jeroen goodnight but couldn't find them, so we said goodnight to all the people staying in the inn. 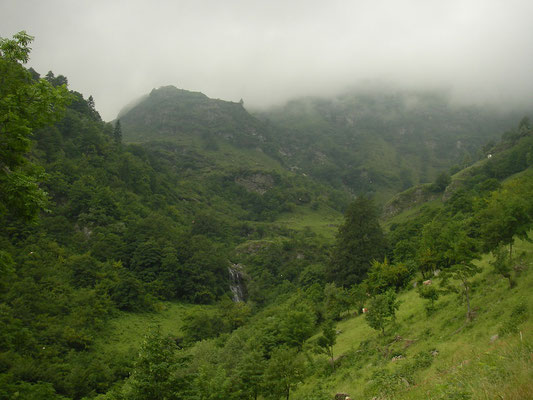 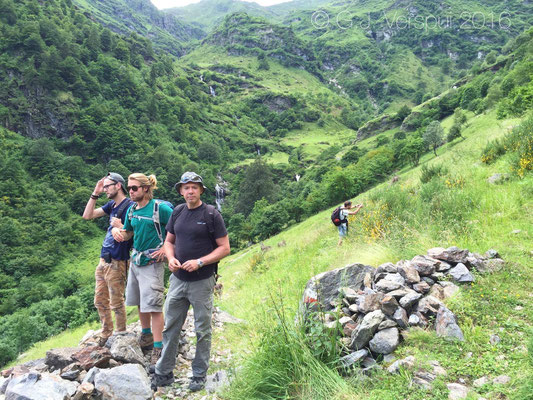 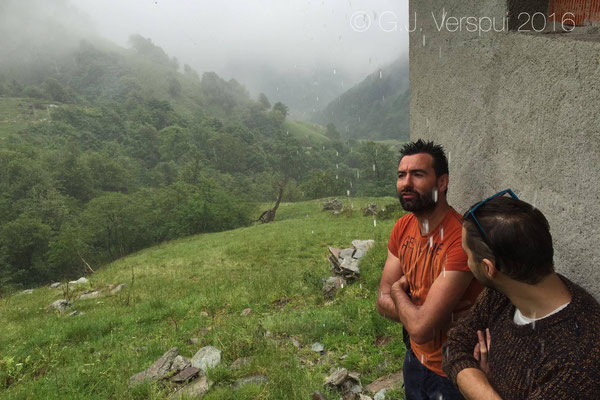 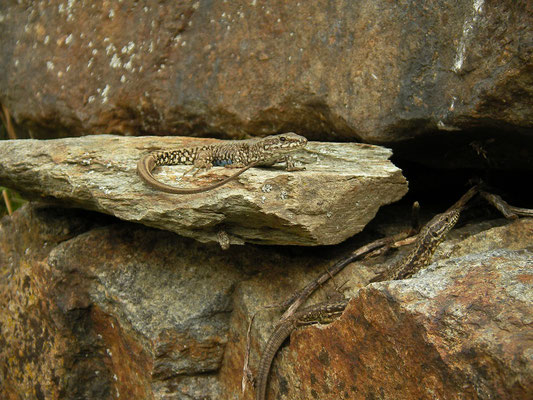 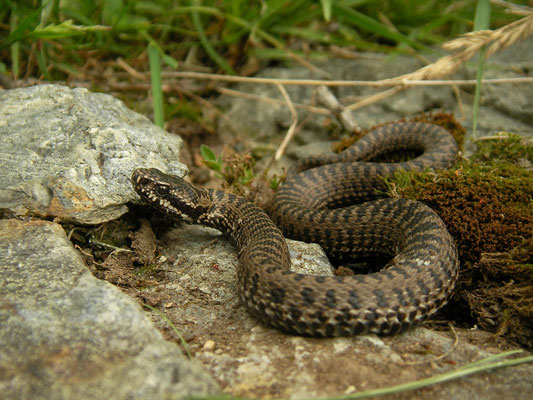 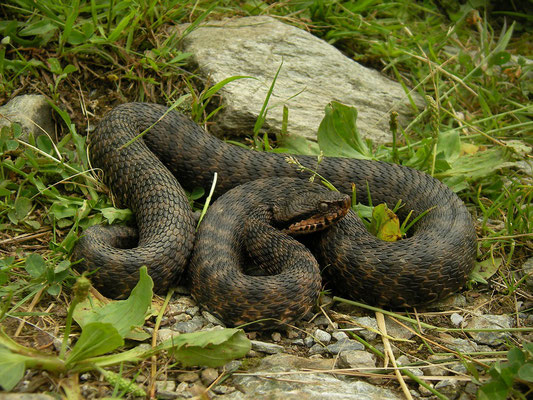 The next morning started sunny and we could finally dry all our damp clothes. Luckily the sunny spell would last all day and after photographing all the beautiful animals that inhabit this stunning valley. Paul and I took it easy and lounged a bit at a pool below a lovely waterfall. With a view on the valley this was the perfect spot to enjoy the weather and this location. Some of the group went up the mountain and found largely the same species but also Common Frog (Rana temporaria) tadpoles. When it got hotter, more and more people decided to join team sunlounger and I only went swimming for about six times or so. When hiking back I was lucky enough to stumble upon Walser Viper number seven, the only male we found and only a few meters outside of town. After a beer and an icecream we sadly had to say goodbye to all our amigos, as always it was too short, and this trip especially! Team Holland/Brexit drove back to the airport and went to Macky D's for dinner. On the road we saw a few Western Whip Snakes (Hierophis viridiflavus) killed by traffic. 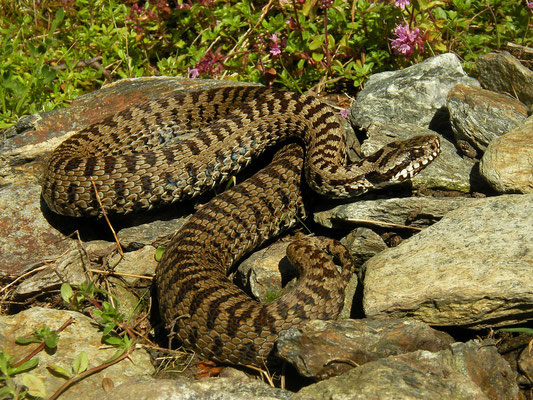 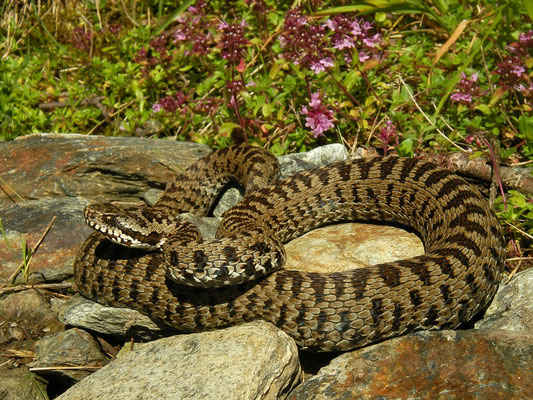 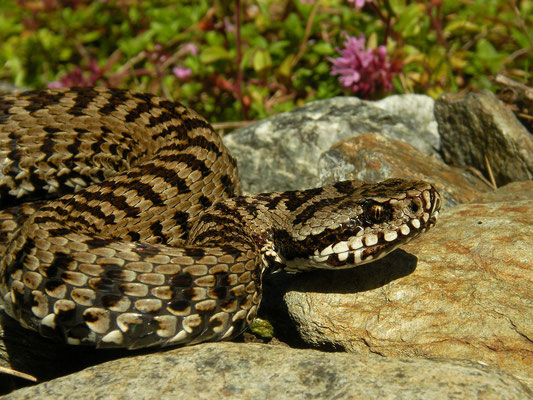 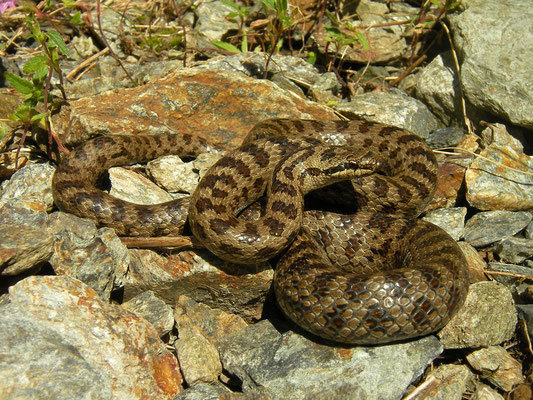 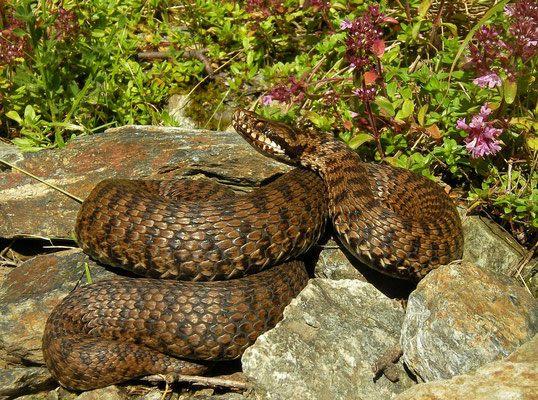 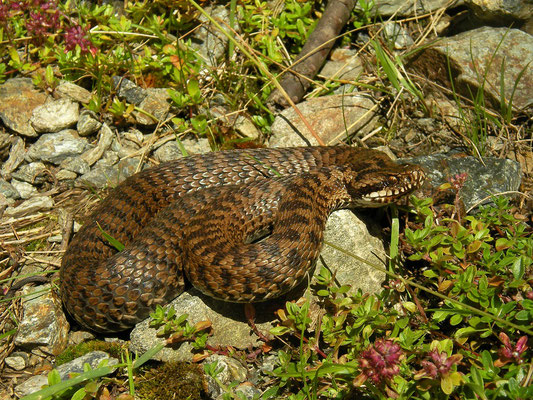 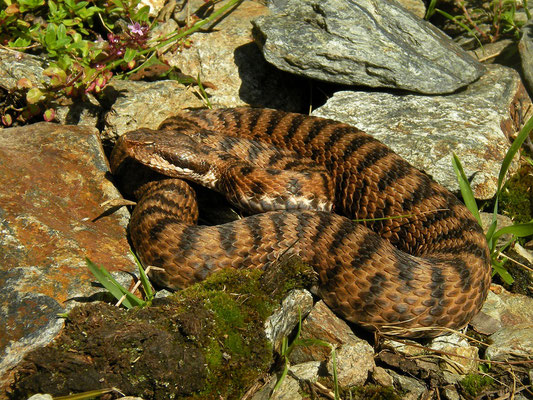 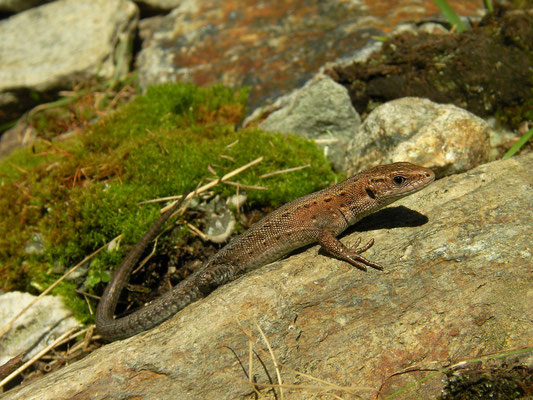 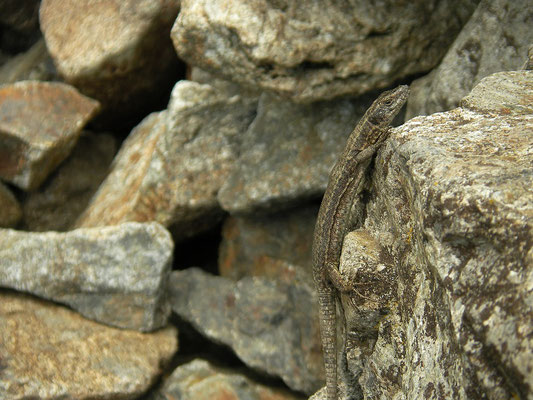 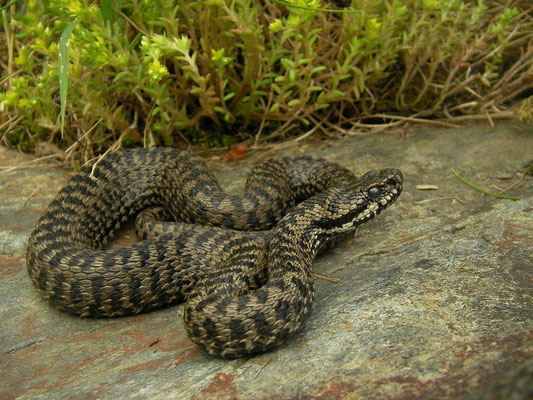 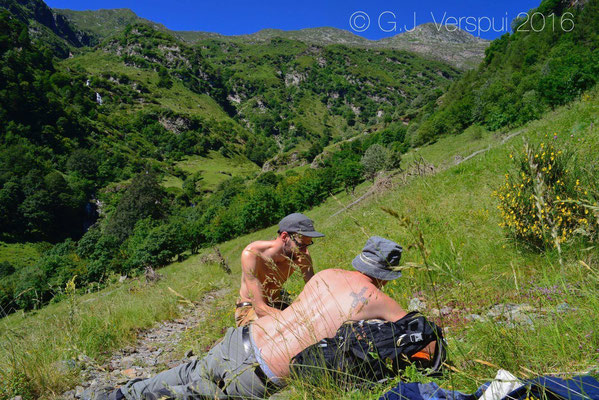 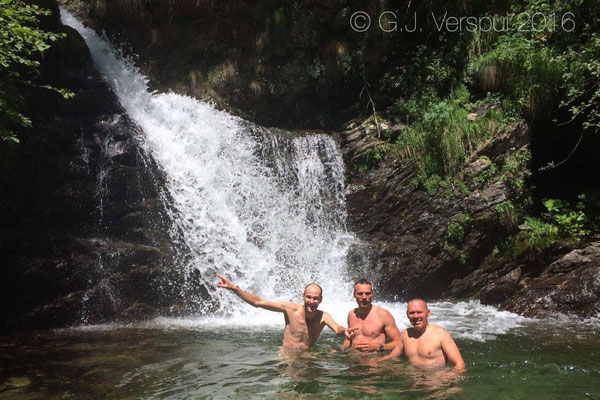